Look At What Came in the Mail Yesterday

Yesterday when I went outside to go to work I found a parcel in my mailbox, and attached with a rubber band was an appropriate postcard.

I'm a member of Postcrossings online.  You send postcards around the world, and you get postcards back from around the world.  Yesterday's postcard was from Abby in Great Britain.  The sheep on the postcard is one local to her region.  She said that the wool is too coarse for garments, and is mostly used for carpets.  She did say what type of sheep this is, but unfortunately I don't remember.  The postcard went up on the wall of my cubicle at work, so I can enjoy looking at it all the time. This is definitely one of my favourite postcards received so far. 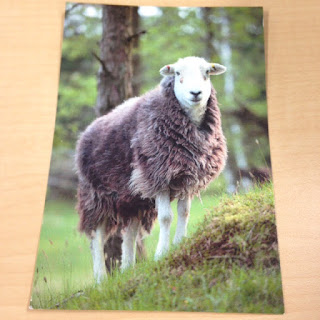 And in the parcel itself there was some yarny goodness!  About a year ago, WEBS had in their clearance section, the Regia Stadion Color.  One of the colourways was white, green and black.  I bought a couple of balls,as it almost matched our local football team. I found out later that there was a green and white colourway, which is perfect for our team (go Riders!) but of course this line was discontinued, which was why WEBS had them in clearance.

I was talking with someone at work about the socks I make, and how I had made the white/green/black striped socks for a friend.  It got me to wondering if I could find any of the green and white out there somewhere,  So, off to Google I went. I found three balls in the green and white colourway!  And even better, is was in Canada! 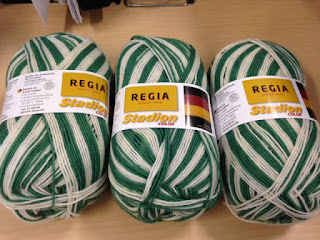 I also got these needles in the same package. 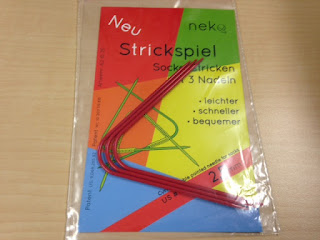 These are German Strickspiel sock needles.  According to the Neko Website, these needles "makes knitting socks, hats and loops easier, faster and much more comfortable".

There's a reason I bought these needles.  Last spring, my friend Susie (who is Knit Natural) had these needles at our Open Fibre Night.  She was going to try them out and do a blog post on them, but didn't have time at the moment.  She asked if I would be interested in trying them and doing a guest blog post, and I said sure, after I finished my current pair of socks.

Well, I put those needles in my project bag,  And somehow, I've managed to misplace the project bag and her needles.  I know they're around here somewhere, but I just haven't been able to figure out where.  And it's been bothering me.  So when I found these needles, I bought them to replace Susie's needles.  So that's one thing off my conscience!

By the way, Susie is the designer of the famous Bankhead Hat.  If you haven't made one yet, you should make one soon!  It's a wonderful pattern, and creates a wonderful hat.  I've made one 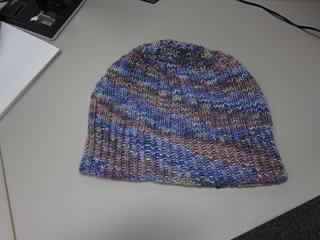 and have another one on the needles (somewhere, probably with that other project bag!).

Have a wonderful Saturday!  Hope the weather is co-operating where you are.  US south east coast people, please keep safe, warm and dry!  I worry about you!

Maureen
Posted by Maureen at 12:06